How to minimize intervention from typesetter

This can be acquired from www.dessci.com/en/products/mathtype and is available for Mac and PC. MathType is very flexible and we recommend you use fixed preferences and follow standard styles for all equations – see below screen capture for details: 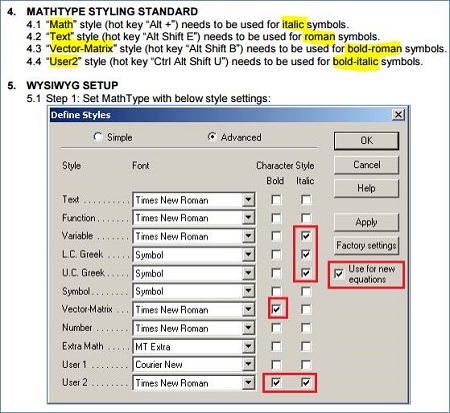 In Microsoft Word, go to Insert–Object and select Microsoft Equation 3.0. (If you are working in Word 2007, do not use the default equation editor: ‘π Equation’)

We treat the PDF you send us as the master version, so check the PDF carefully, particularly the rendering of the inline mathematics and displayed equations.

How to minimize intervention from the typesetter

Here are a few ways that you can minimize manual intervention in your equations:

For Equation Editor, use the default styles (Style–Define).

Changing the settings and fonts can cause problems. If you use any fonts that are not included in the normal MathType/Equation Editor font set, list them clearly when submitting.

Variables – Typeset in italic, e.g. (a + y). Two–letter variables, e.g. KE for kinetic energy, should be set in roman to prevent misreading as a product of two variables.

Vectors – No arrow above the letter – rather typeset in bold, e.g. (a). (Most vectors used in physics are variable vectors; see below.)

Matrices – Inline: typeset in bold caps, e.g. [I]. Display: set within square brackets. (Most matrices used in physics are variable matrices; see below.)

Variable matrices – Typeset in bold italic caps, e.g. (B). Ellipses in matrices should consist of three points – ‘...’ (vertical or horizontal).

Sub and Superscripts: words and abbreviations – If a superscript or subscript is a word or an abbreviation, typeset in roman.

Sub and Superscripts: single letters – Most single–letter subscripts and superscripts and all numerical sub– and superscripts are set roman. Exception: Subscripts representing a running number (e.g. n in the sense of 1, 2, 3...) or quantities (e.g. P and V indicating specific heat) are typeset in italic. Differential d – Typeset in roman.

Functions and operators – Named (abbreviated) functions and operators, such as ‘log’, ‘ln’, ‘exp’, ‘Im’, ‘Re’, ‘lim’, ‘max’, and ‘tr’, and trigonometric functions, such as ‘sin’, ‘tan’, etc., are set in roman. They do not take full points. These functions are followed by a space, then the numerical value. However there is no space if the argument (symbol or number) is enclosed in parentheses, brackets, or braces.

Ellipses - Include a comma (and space) after the three ellipsis dots when the final term follows, e.g. x1, x2,..., xn. Only ellipses indicating omissions in series or lists are set on the line. Ellipses indicating missing terms in equations are centered vertically.

Use stacked fractions in display. Don’t use soliduses (e.g. a/bx), or negative superscripts (e.g. a(bx)–1). If displayed equations break try to break them before an operation symbol (e.g. = < > + - x) that follows a bracket. Fractions, matrices and expressions contained within brackets should not be broken if at all possible.

Order of brackets/fences is as follows – {[()]} – starting with () and working from the inside out. Brackets should appear in pairs.

Inline equations. Avoid in–line expressions that require lines of type to spread – i.e. overbars, summation signs, stacked fractions, etc. Either set in display rather than in–line, or, if the fraction is more complex and cannot be stacked as a single character, use negative superscripts, e.g. a(bx)-1. Avoid breaking equations in line – rather display them. Use negative superscripts in preference to soliduses, i.e. follow SI specifications.